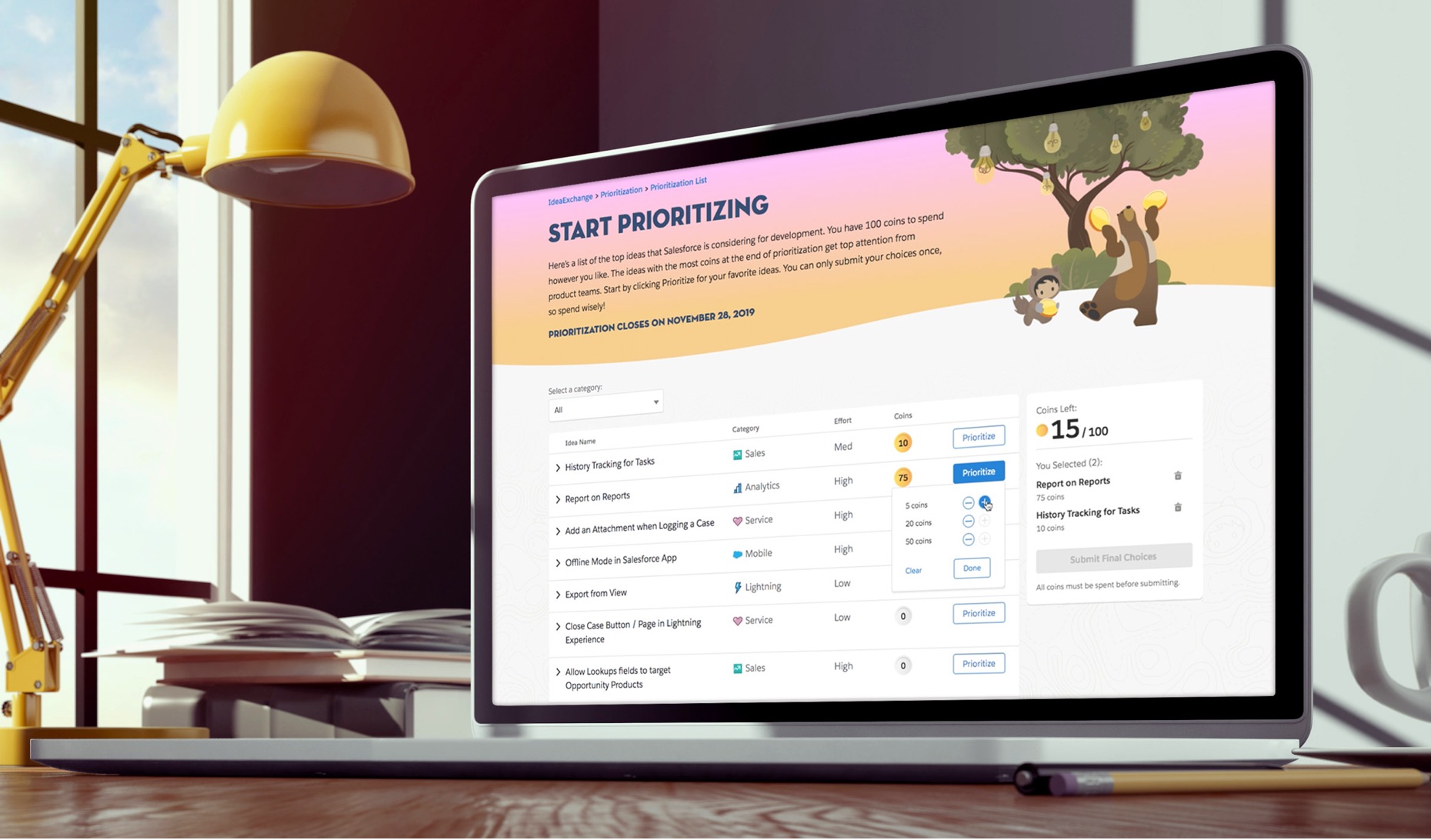 Salesforce's IdeaExchange is a best-in-class enterprise product feedback platform. It empowers Salesforce customers and partners to post, vote, and comment on product ideas at a grand scale, many of them becoming product features. Throughout the many years the IdeaExchange has been in existence, the number of customers and products grew at an amazing rate, with roughly 70,000 ideas submitted. A scalability issue was at play and it became challenging for Salesforce product teams to truly interpret which ideas where top of mind for our community. Consequently, during Dreamforce (Salesforce's largest conference), then Chief Product Officer Bret Taylor and Co-Founder Parker Harris announced to a live audience of thousands that the company would do something about it.

I was offered the opportunity to join the IdeaExchange team as UX lead in helping see that vision through. In collaboration with product, engineering, and cross-org designers, my role was to lead the UX research, design, and strategy for a new feature which we eventually named Prioritization. Soon after joining, as I began to understand the scope, scale, and timeline we were dealing with I made a case for an additional designer who I recruited and managed.

Relationship design is at the heart of what Salesforce does, in turn leading to a focus on customer success. The IdeaExchange plays an essential role in telling that story, as featured during season 1 of America By Design.
Goals
Trust and transparency are the most important values at Salesforce, and we look to our community of customers and partners as trusted advisors. But with the sheer number of ideas on the IdeaExchange many of those great ideas lost traction. There needed to be a way where the company could pinpoint amongst the tens of thousands of ideas which ones our community wanted to see become features. Essentially an intuitive and engaging experience that could put our users in the shoes of our product teams in helping shape our roadmap, with an understanding that there are limited resources and a limited number of features could be delivered during each release.
Discovery & Planning
Before we began any concept work, we spoke to our users in order to get a better sense of their pain points. This also included feedback on their vision of what this new feature could become. As well as diving into additional information they needed from Salesforce so they could make a well informed decision as to which ideas mattered most to them. One point of emphasis was not merely understanding what those ideas were, but also which ones should have priority over another. This feedback, along with other insights led to numerous discussions within our team as to how the interaction and decision points of the program could help shape the experience.

Early diagram of key interaction and decision points
Early Concepts
One of the biggest adoption blockers is learning how to use a new product or feature. Consequently, during the early ideation phase I organized numerous brainstorming, working sessions, and inspiration seeking exercises. This led us to exploring patterns from e-commerce, elections, and research models. More specifically interactions that stemmed from simple item selection, favoriting, ranking exercises, and shopping carts. Throughout the numerous early explorations and usability sessions, we continued to improve the concepts along the way, eventually leading us to the solution we shipped. 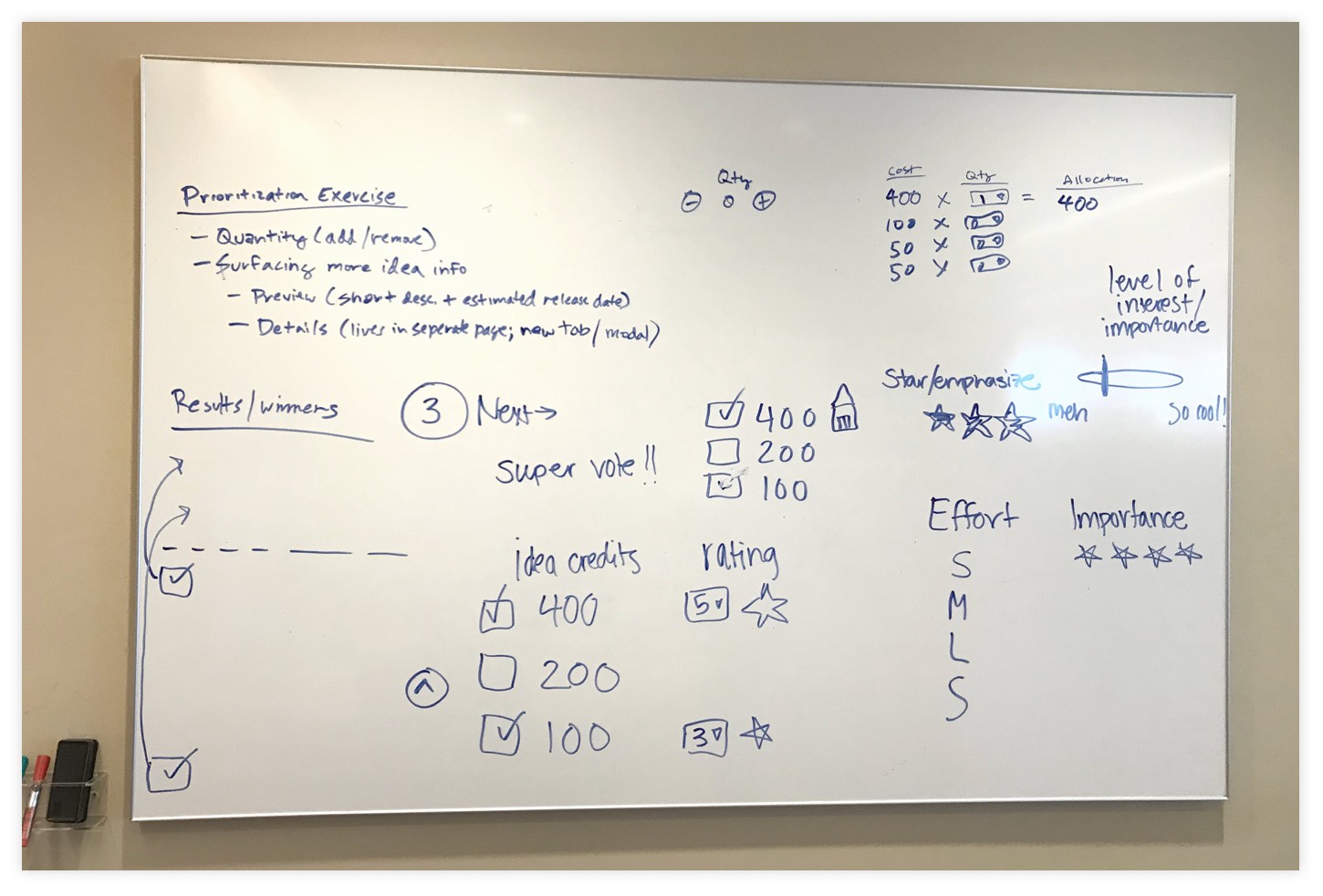 One of many brainstorming sessions
Ranking Concept

The Ranking Concept was our earliest concept. It's a two step process where in step 1 the user begins by simply selecting their favorite five ideas from the list. 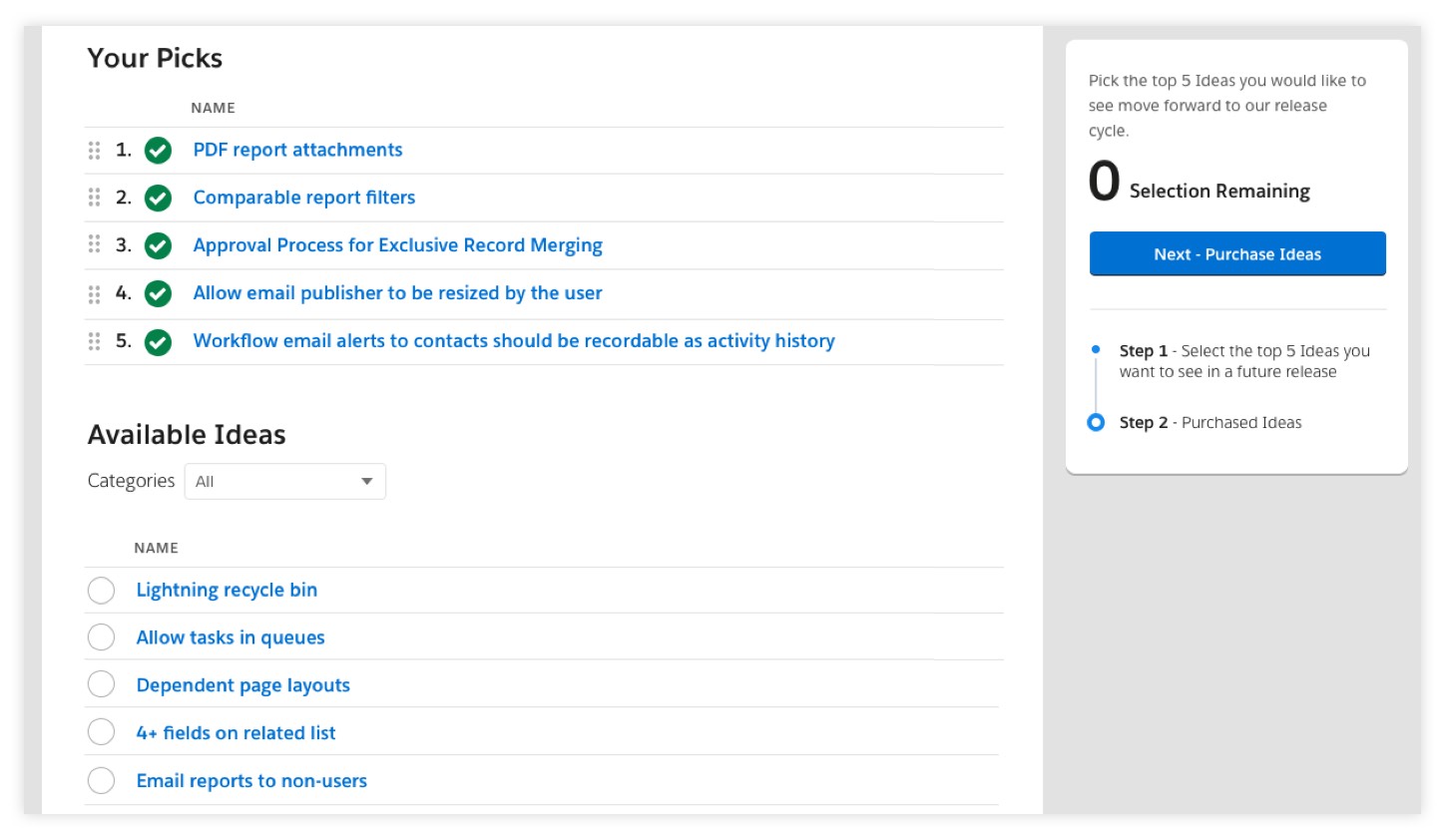 In step 2, the user ranks the selected ideas based on importance. Although straightforward and simple, this approach did not inform the user as to how complex the feature would be to build. As well as forcing the user to select a specific number of ideas.
Cost + Ranking Concept 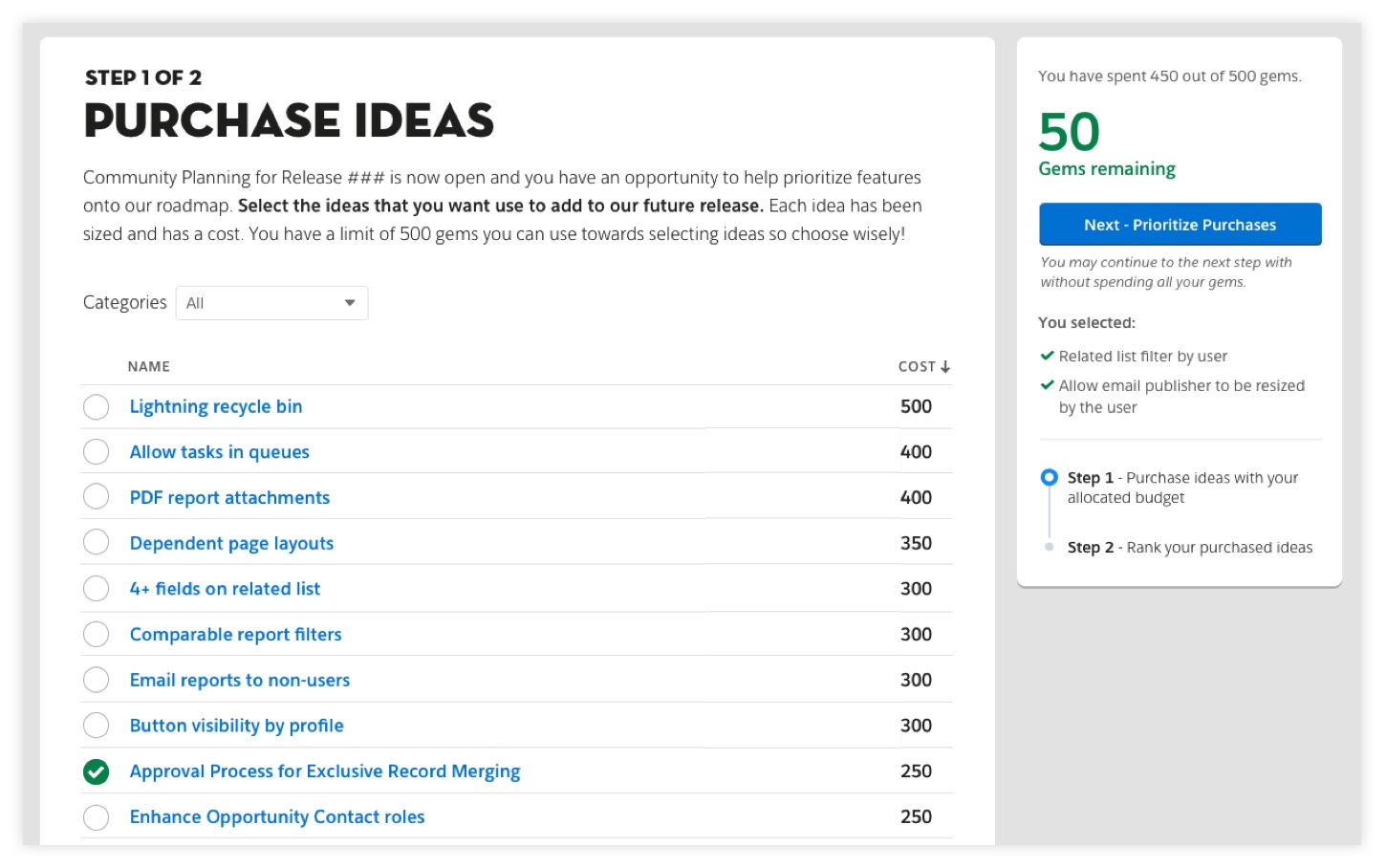 The Cost + Ranking Concept added another dimension to a pure ranking exercise. It indicated a level of effort for each idea by means of a coin cost, reflecting the amount of time and resources needed to design and develop the idea. In step 1, the user selects ideas based on a set budget of 500 coins.

In step 2, the user ranks their selected ideas based on importance. As we continued to discuss the type of data we wanted to capture in informing our product teams, we observed that the ranking concept was not informing the level of importance a selected idea was over another.
Cost + Quantity Button Concept

The Cost + Quantity Button Concept started to dive into both the perceived cost associated with an idea, as well as the magnitude of importance or priority. This concept borrows from e-commerce models, allowing the user to select multiple quantities to reflect importance.
Cost + Quantity Dropdown Concept 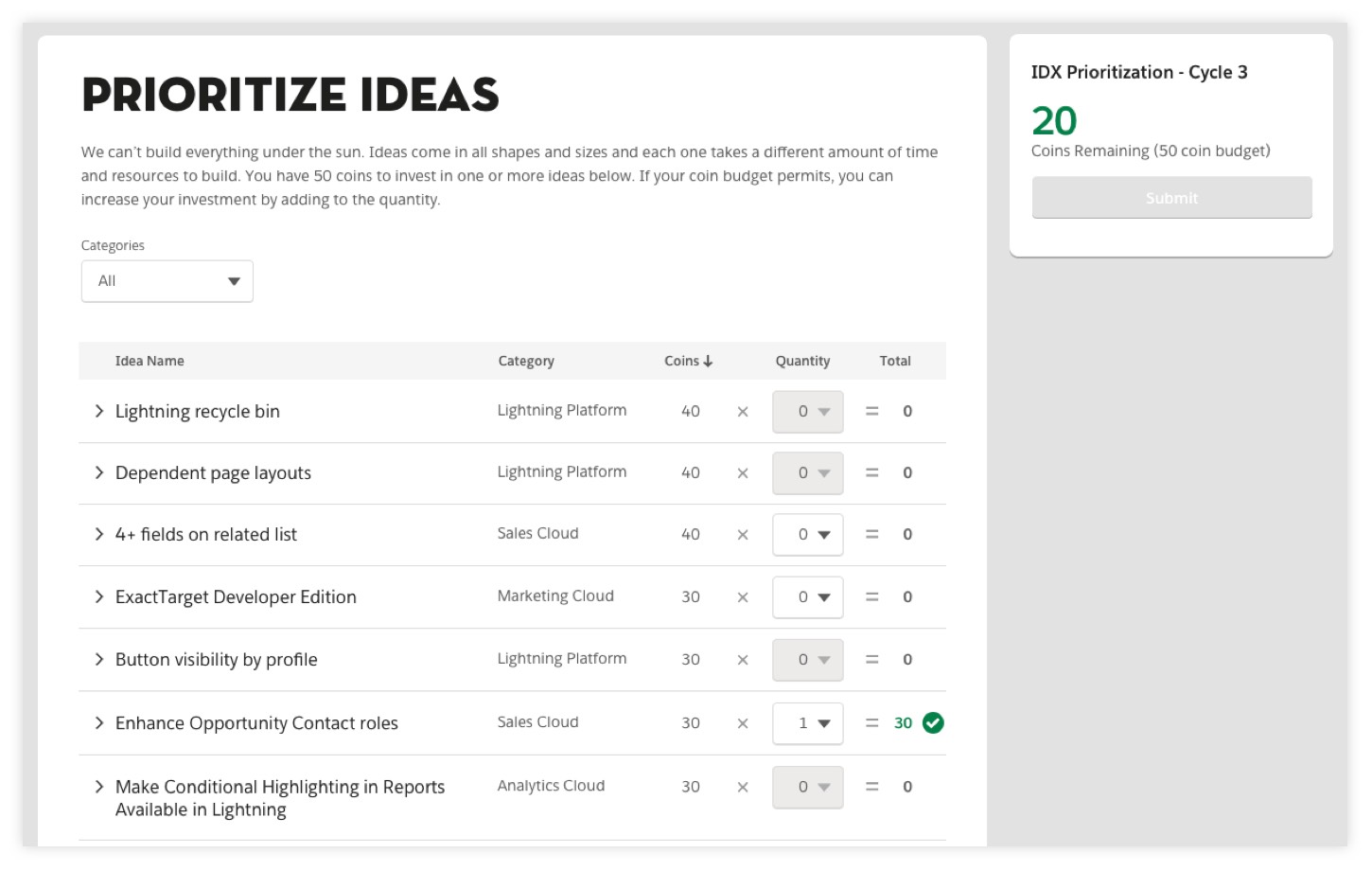 The Cost + Quantity Dropdown Concept was similar to the Cost + Quantity Button Concept with the difference being the user interface used to select the quantity is a dropdown. But from the user feedback, the challenge with the quantity model was that it limited the user from selecting multiple quantities for higher cost ideas. We considered increasing the overall budget but decided that it would complicate the usability significantly, essentially more calculations for the user. Furthermore, our research indicated that associating an idea with multiple quantities was confusing from an delivery standpoint because ultimately it was still only a single feature we would be shipping.
Investment Open Allocation Concept 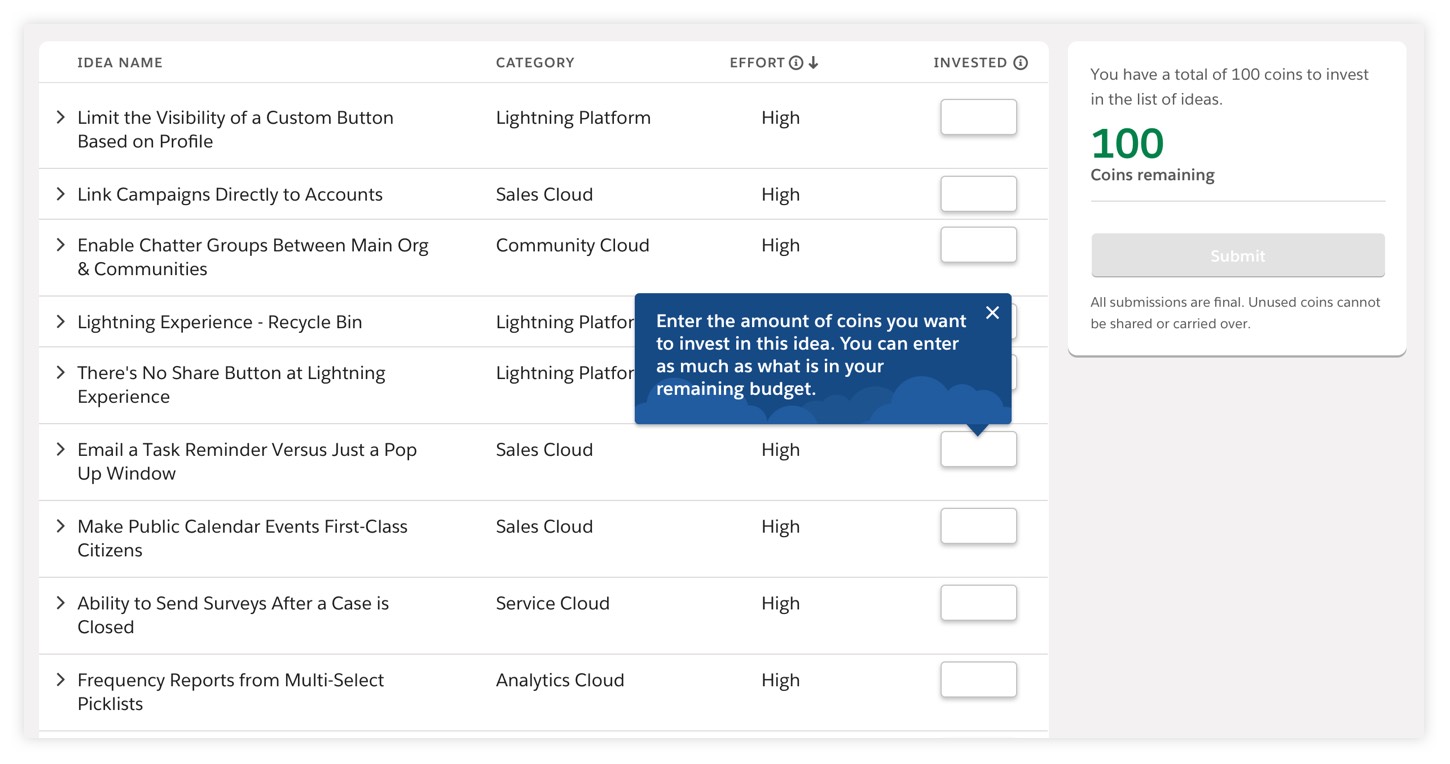 The Investment Open Allocation Concept steered us much closer to our final solution. Instead of having a set price and restrictions on quantity, it borrowed the concept of investing. A user would enter their perceived value for an idea, allowing them to invest all 100 coins towards one idea they absolutely loved or spread them amongst many ideas. During usability testing we heard that even with the help text, users were still confused as to what they could enter in the fields.
Investment Set Value Concept 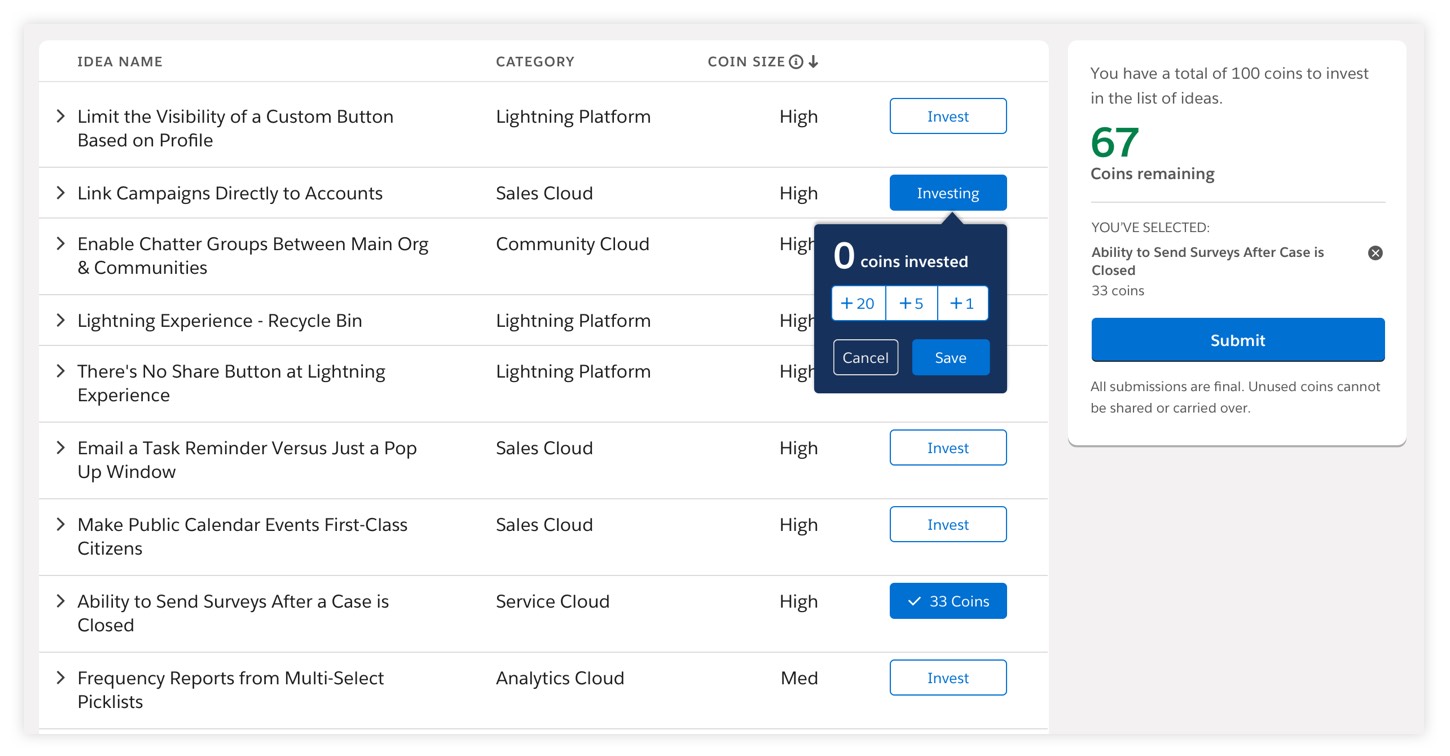 The Investment Set Value Concept allowed users to invest towards any idea through specific coin denominations. The preset coin buttons provided the right amount of guidance and control, and users responded very positively to this interaction. They did however indicate that 1 coin increments were too granular for a 100 coin budget. The feedback we received for this concept ultimately steered us to a solution.
Solution
Finally, a moment of celebration emerged after the numerous collaboration sessions and rounds of concepts and research sessions. Our final solution used familiar interactions from e-commerce, investment, and gamification, but the collective experience itself was quite innovative. Users are given 100 coins to allocate towards a curated list of top ideas, using increments of 5, 20, 50 coins, with the denominations reflecting most currencies around the world. The menu interface and actions for allocating coins provided just the right amount of guidance while still allowing for flexibility in the number of ideas a user could invest in. Removing an associated cost for an idea allowed users to pinpoint not only which ideas were most important to them, but also the magnitude of a selected idea over another. Giving them the flexibility to allocate all 100 coins towards one idea or spread them amongst many.

The accordion functionality kept the list of ideas scannable and light, yet additional relevant information could be easily revealed such as the general availability, a short description, and a link to the idea details. Displayng the effort helped communicate how much work the feature would take and an additional data point into the reasoning behind general availability date. Once a user begins to allocate coins towards an idea their selections and coin allocations appear conveniently in their cart. Once they've invested all their coins, they're ready to submit.

Prioritization occurs during a two week window in step with our product teams' release cycle. After the cycle closes we close the loop with our community and the winning ideas are announced along with the complete final coin totals.

Much effort was placed in creating a fantastic interaction for Prioritization on both desktop and mobile, but we wanted to take the overall experience to the next level. Extra attention was put toward the intricacies of the visual design and the subtle kinetics of animation and motion. Key to this was collaboration with our internal design system and illustration teams to ensure that components and visual style were used properly. Our kinetics team guided and supported us on where motion could help reinforce the key interactions while adding those extra moments of delight. 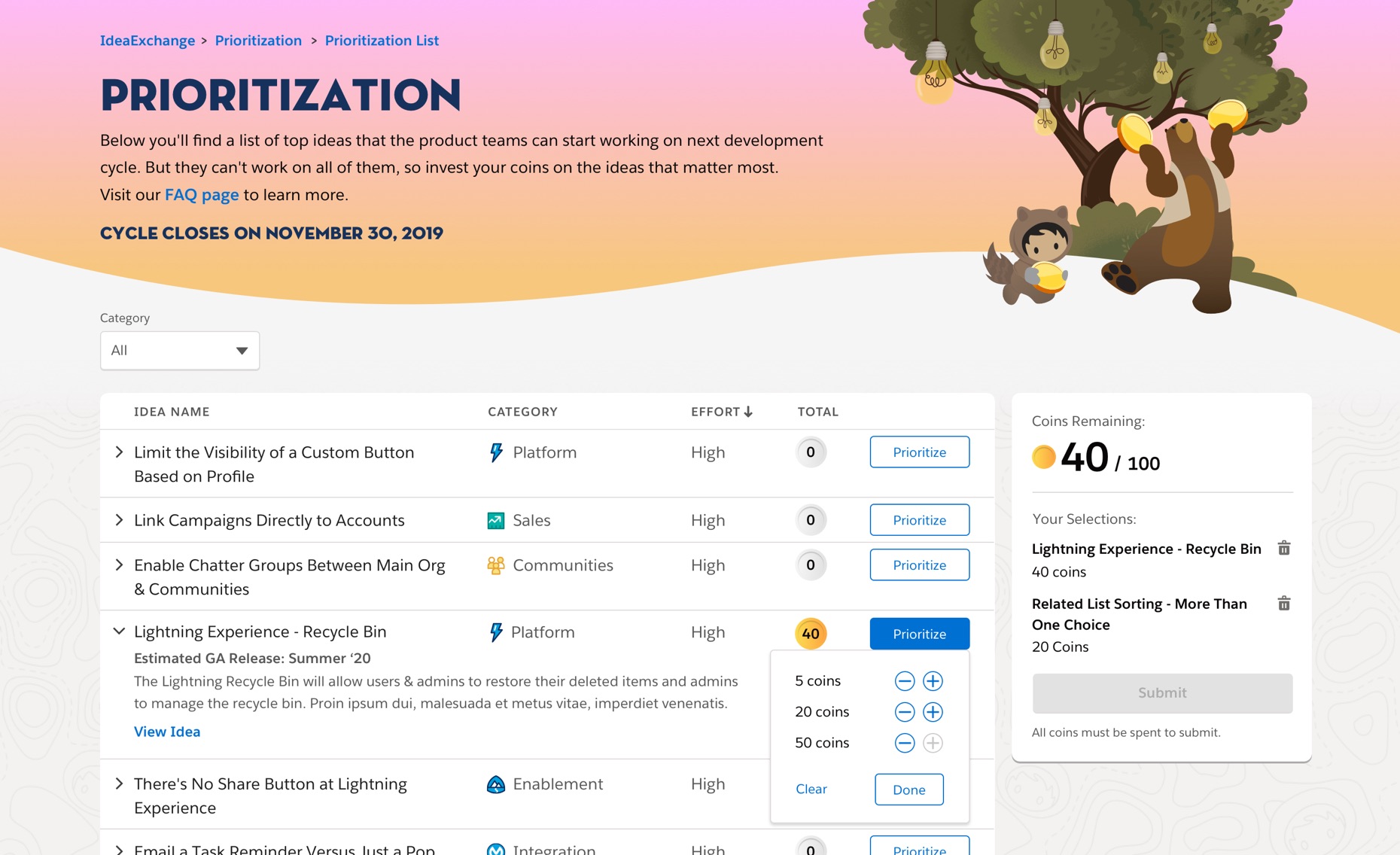 Users are given 100 coins to allocate, using increments of 5, 20, 50 coins. Selections are listed in their cart on the right. Additional idea information can be viewed under the accordion when needed. 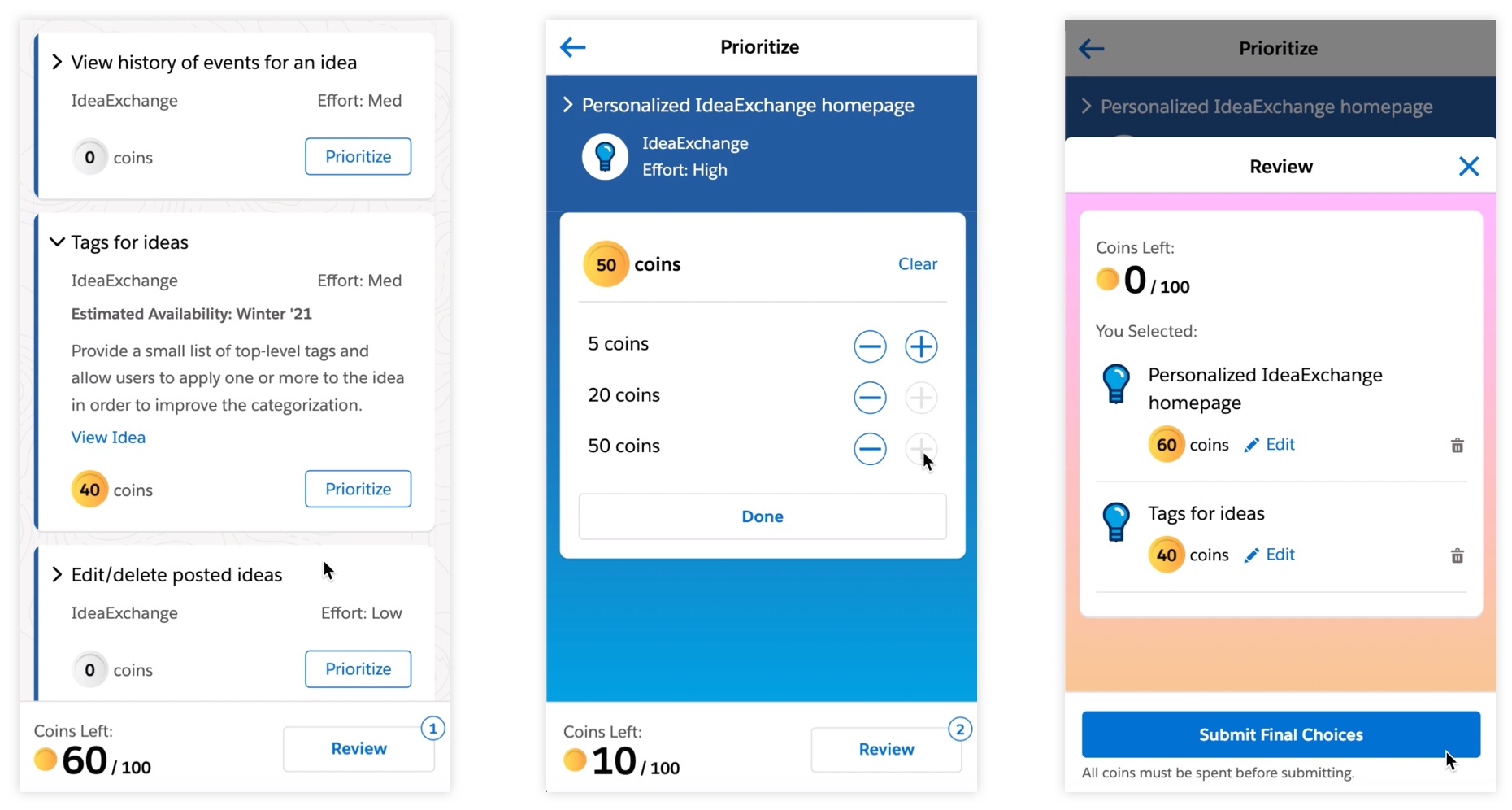 Mobile usage on the IdeaExchange is far less compared to desktop. But understanding that users would still interact with the feature on-the-go, we brought the same level of care and detail into the mobile experience. Maintaining consistency with the desktop experience, while adhering to mobile interactions and standards. 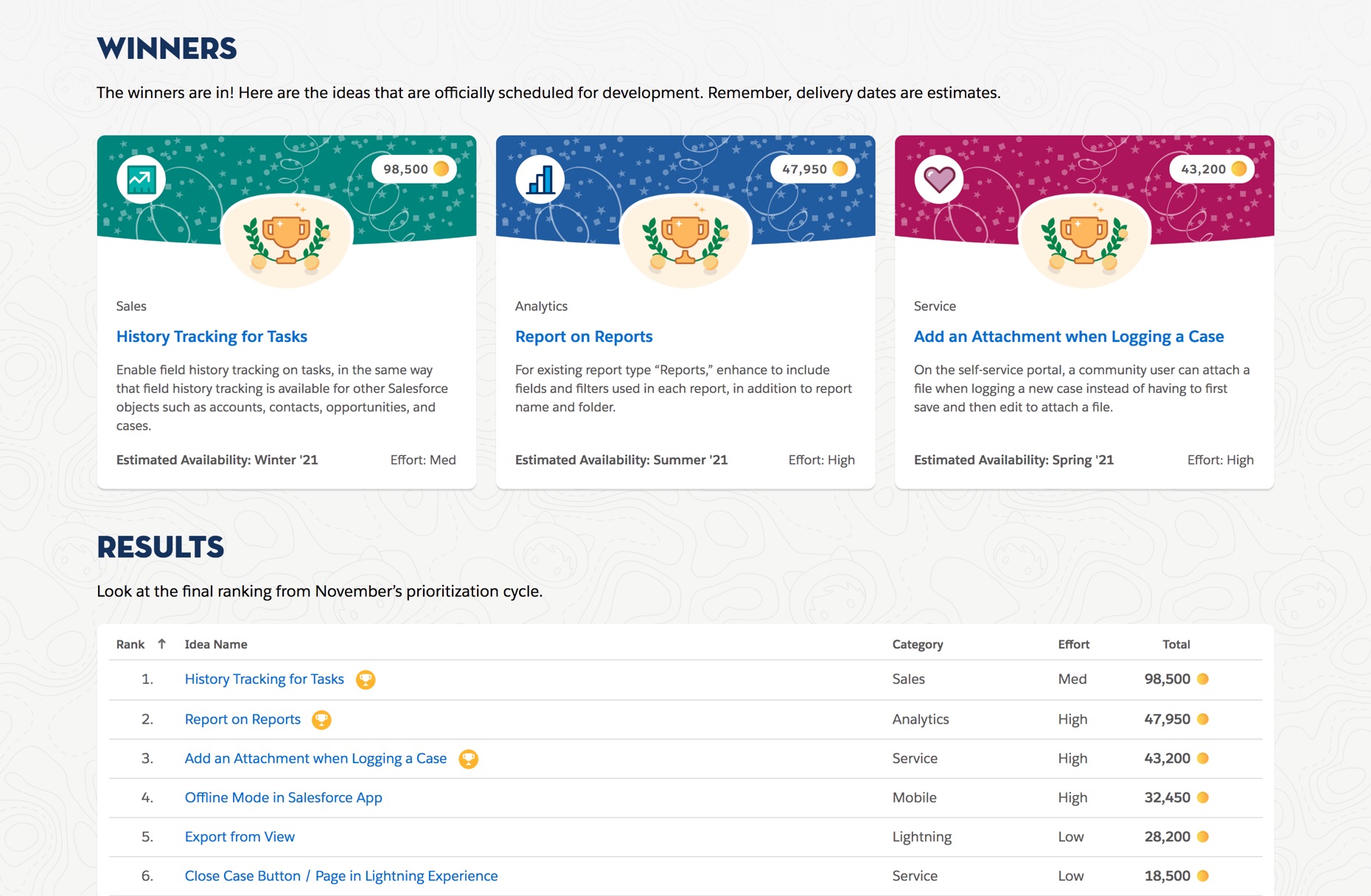 After the two week prioritization cycle closes, we announce the winning ideas. In keeping with our value of trust and transparency, we list the coin totals each idea received. (Not actual winners or results)
Additional Notes
When we launched the first official Prioritization cycle in early 2020 and the positive feedback was tremendous. Our community wanted a democratic way to help shape the Salesforce roadmap, and Prioritization surely fulfilled that need. As Prioritization continues to collect more data through future rounds of Prioritization, further innovations and improvements to the product will be made. Emphasis will be placed on additional methods for capturing insights, thus better information on which features our customers and users want the most. In addition, monitoring the level of engagement and usage with the goal continued improvements to the overall experience.

Leading the user experience for the new IdeaExchange Prioritization feature truly brought out the best in me. There were challenges that required deep thinking and problem-solving relating to usability, visual design, content, program, and strategy. Most of all, the collaboration and partnerships I had in helping shape a product that empowers our users, while providing genuine value and delight made it all the more amazing.

Read more about the process in my article IdeaExchange: Enterprise Crowdsourcing Through Gamification.